Introduction to Cheat or BS 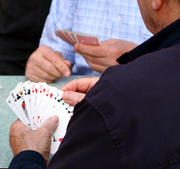 Cheat is a shedding-type, deception card-game that is played by three or more players. The goal of the game is to get rid of all your cards before all the other players. Cheat is also known as “Bullshit” in the US and “I Doubt It” in other countries. In Britain, this famous card game is widely known under the name “Cheat”. Since there is bluffing involved in the game, it’s a good game to play with friends.

Cheat is played using a standard 52-deck card. However, if there are a lot of players participating in the game, it is best to use two sets of 52-deck cards to be able to distribute enough cards for everyone. At the beginning of the game, the deck must be shuffled and distributed evenly. Although, the distribution is not always even, depending on the number of players in the game, so some players might have a few more cards than others but the difference is not much.

Players must gather in a circle, preferably around a flat surface like a table or the floor. Since all the cards are distributed to the players, the discard pile starts out empty. The player who gets the ace of spades gets to be the first player or sometimes, the dealer is chosen as the first player. After the first player takes a turn (presumably putting down the ace of spades), the next player must put down a card higher than an ace. The order of cards should be: Ace first, twos next, and then threes and so on. Since the cards are placed on the surface facing down, players don’t necessarily have to have a card that corresponds to the rank required for the turn.

Every player can make a claim and as long as no one calls “Cheat!”, the game continues onto the next player. In other countries, players call “Bullshit!” or “I Doubt it!” instead of “cheat”, depending on what they call the game.

Every player who takes a turn must announce how many cards they are putting down (e.g. 2 aces) but the player can later on lie about the number of cards they put down.

The first player who manages to get rid of all the cards from his hand unchallenged wins the game.

Cheat is best played using an actual 52-card deck, as it is much more fun and exciting to gather around with your friends playing with physical cards that you can touch. However, you can also play the game online in the absence of a deck of cards. The advantage of playing the game online is that you can play with your friends even if they are not with you. You can also find other players online who you can play with, making the game a very social and fun experience as well.

Cheat is available on http://www.fupa.com/play/Casino-free-games/cheat.html, as a multiplayer game where you can play with randomly selected opponents. An online version of the game is also available on http://www.shindigbs.com/. The site allows players to create their own game room and invite their friends to play. It also has video chat support.

If you prefer to play via a mobile app, Cheat is also available under the name “I Doubt it” on the Apple app store and the Android Play Store so you can play the game on your mobile phone or tablet.

There are some strategies that players can use in a game of Cheat. Despite the nature of the game, most sources say that one of the best strategies one can employ is to simply play honestly. If you play honestly, you’ll always have an advantage over anyone who calls “cheat”. Some players end up losing a game on the last round because they don’t play honestly. Supposing on your last turn, you make a claim that isn’t true and a player calls “cheat”, you’ll have no choice but to reveal the card and take all the cards on the discard pile. What should have been your last turn will end up to be just one of many turns you still have to play.

You can also call “cheat” on someone who is about to put down their last card unless you’re absolutely certain that they are telling the truth. You can also choose to wait for someone to call “cheat” so you don’t risk having to get all the cards if your call turns out to be false.

It is also best to analyze the cards in your hand before making a move. Obviously, if someone makes a claim and you have majority of the cards in that rank, calling “cheat” will be to your best advantage.

According to the list of strategies listed on WikiHow, you should arrange your cards not in order of their rank but in the order that you have to play them. You can memorize the sequence by which the cards will come to you so you can strategize properly. Another good strategy that is listed on the page is to put down the cards that come latest in the sequence even if lying is necessary to get rid of it. Hold on to the cards that are about to come next so that you can play them honestly when you need to.

When playing Cheat, it is best if you always try to direct the game towards the cards that you have in your hand. For instance, if you have higher ranked cards and the game is still currently on the lower ranks, you should always make a claim that is higher than the last card played so that you have actual cards to play later on.

Playing honestly will also make it harder for other players to call “cheat” when it is your turn (even when you are bluffing) especially if they think you are an honest player. And remember, your facial expression can also help a lot in casting doubt in other players so if you have to lie, you have to lie with emotion.

If you’re new to the card game “Cheat”, you might find the following video tutorials helpful:

Cheat can be a really fun game, especially when you are playing with friends. It tests not only a player’s ability to strategize and play honestly despite the odds but it also shows how good a player is at lying. Plus, shouting “Cheat” or “bullshit” can be incredibly fun and exhilarating!

For more information about the card game Cheat, you can visit the following resources, which also contain helpful strategies and tips: