How to Win More in Reversi/Othello

When it comes to Reversi, you have a mixture of strategies from games such as chess and 9ball pool involved at the same time. In both games, you have elements of blocking or limiting your opponents moves. You also have to know where to move and when. In 9ball pool, pocketing a ball that doesn’t give you any real preparation for you next shots is well known as a bad idea. In chess, it’s a similar problem. Taking an opponent’s piece at the wrong moment can cost you the game. In both games, thinking well ahead makes a big difference.

For those who are unfamiliar with Reversi, now would be an excellent time to learn how to play. For those that already know the game, the recommendation is to start out with some beginner tips and strategies. Those strategies help give you some general ideas to try.

While trying it out and getting used to it, it’s a good idea to think about what just happened during your losses. Hopefully you were paying attention to the moves you made. If not and on the upside, there’re ways to record your game depending on which method of play you used. For example, if you were playing against a person, you could simply write down the all the moves that were made. The most common is to look at the board just like a chess board. Label the top row across as letters A to H. Then you label the first column as 1 to 8. Otherwise, any video recording device would do. The idea is to figure out where you went wrong and try not to repeat it next time. For those playing either on a computer and/or a mobile device (Android version and iOS version), you can simply screen record your game even if the game doesn’t have a recording feature. 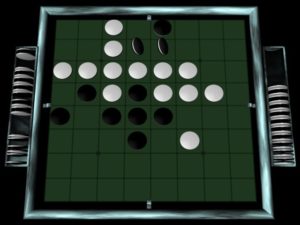 Reversi for the PC 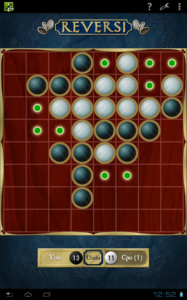 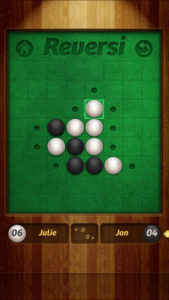 This particular tactic turned out to be a pretty good one meaning it can be surprisingly tricky and effective especially against “newer” players. You still might be able to catch some “advanced” players off guard with this. This is still listed as a “beginner’s” tactic but don’t let that stop you from using it!! To pick up the pace on it a bit more, you set a certain number of moves to keep doing it. But during each game you play, pick a different number to stop doing this. At the same time, keep a close eye on your opponents score.

Basically, you’re “wasting” moves right from the start. Or at least that’s what it should look like you’re doing!! The idea is to only flip 1 up to 3 of your opponent’s pieces at any given time. Try to get to the edges of the board too at the same time. All this is done in random locations. Basically, you don’t really care. So far, I’ve seen the better results by constantly doing this between the first 5 up to 12 moves. From there, start making bigger flips. At that point, start calculating moves as described against the AI. The trick to this is the end game results. All the while your opponent might be thinking they have the board. Next thing they know, they have no useful moves and/or just lost!! You’d be able to make the bigger sets of flips with bigger sets of your opponent’s pieces in the middle of your “scattered” pieces.

Play Against the AI

Now for something a little harder. There are a number of times you’d see this mentioned in your searches for Reversi strategies. The main reason being is that the Artificial Intelligence (AI or computer opponent) is designed to hammer you at every chance. This is especially true at the higher difficulty levels against the AI. As it turns out, this is good practice for you. The idea is to be able to beat the AI at its own game by returning the favor. You do this by calculating as many moves as you can and decide which one would give you the better results BEFORE making your move.

The trick to this is that more often than not, you’re not being timed. So take your time!! The main problem is determining when the best time is to go after bigger flips. This is something you’ll have to watch out for on your own. Each and every game is going to be played somewhat differently depending on your opponent. Against a person, you can play as randomly as you want and still come out ahead. The AIs are designed to make specific moves so its random play eventually might not be there so much like a human opponent. The other problem is getting a good AI opponent. Not all Reversi games are made equal. Playing against an AI that just plain sucks absolutely will not help you. Find a better version if possible.

This covers both preventing moves and limiting your opponent’s moves. Both ideas are great to have in your arsenal. The problem is trying to accomplish them!! It’s true that you can prevent your opponent from making a move in which case they have no choice but to skip. But ending up in that situation is very rare. It will depend on how well your opponent can play. Again with the actual random nature of any Reversi game! Only a little more common is limiting your opponent’s moves. That won’t be easy but it’s more possible if you were calculating things.

As amusing as this may seem, unfortunately, this is not the way to play Reversi. “Jedi Moves” refers to your attempts at anticipating your opponent’s moves. So unless you’re a true blue mind reader, you really shouldn’t rely on anticipation. You should focus more on gambling type card games if you are a mind reader. Oddly enough, you can fake this with some human opponents!

Unfortunately, this won’t work much at all against an AI. You’re not really anticipating the AI’s moves when you’re already able to calculate its moves. At that point, try a higher AI difficulty level to see if it comes up with something new against you. The point being, don’t confuse calculations and anticipation. You can expect one move to be made thinking it’s the better bet for your opponent and they see it. It’s honestly a good idea to play in this manner. You can plan your moves a little better when it happens. Next thing you know, the opponent makes some completely random move. If you were not prepared for it, prepare for a loss!!