Mexican Train Dominoes is a popular dominoes game in which players play out “trains” of dominoes from a center “engine” or “station”. It’s sold as a game set which includes the dominoes, a central “station”, train playing pieces, rules, and a train whistle.

Although you can play Mexican Train Dominoes with a standard set of double-12 dominoes, it’s nice to have the official game set. The game experience is enhanced with the official set. 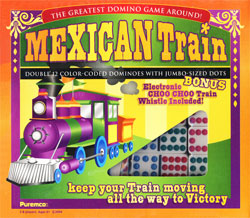 If you do not wish to purchase the game set but would like to play with standard dominoes, check out these Mexican Train rules and strategies by David Bauguess.

You can also find Mexican Train Dominoes rules and game variations at Wikipedia.