Chickenfoot is a fun dominoes game that originated in Texas. What makes the game unique is that you can place dominoes diagonally on one side of a double to form a “chicken foot”. Details below.

Leave the rest of the dominoes face-down on the table in the “chicken yard”.

The next player to the left must then place a matching domino next to the first domino. For example, if the first player started the game with double-nine, the next player must play a domino that has a nine on it.

If the player doesn’t have a domino of matching value, they must pick up one domino from the chicken yard. If they still can’t play, they pass.

The first double played in the game is a spinner. You can play off all four sides of the spinner.

The next time any double is played, it is a chickenfoot. The three toes of the chickenfoot must be played before any other dominoes can be played. 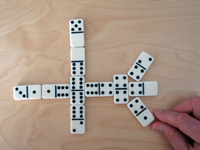 This diagram shows how the three toes of the chicken foot must be filled in before tiles can be played elsewhere.

After the chickenfoot is filled, the game continues as before and players may place pieces on any open end.

The round ends when someone runs out of dominoes, or when everyone passes because the game is blocked.

Each player scores the number of points in their hand. Double-blank is worth 50 points.

The object of the game is to score as few points as possible.