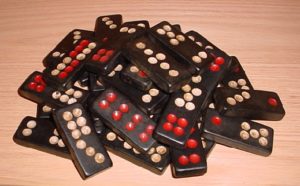 The pip patterns for Chinese Dominoes are based on a pair of Chinese six-sided dice. Each possible outcome of a roll is represented on a tile. There are twenty-one possible combinations. Eleven of these combinations are repeated. Thus, a Chinese Domino set contains a total of thirty-two tiles.

The color pattern of the pips is also based on Chinese dice. Each single pip and set of four pips is red. For example, the 4-5 tile has four red pips and five white pips. The 3-3 tile is the only exception; three of its pips are red, distinguishing it as the highest ranking tile. The tiles are split into two “suits,” a Civilian, and a Military suit. There is no short cut to tell which tile belongs to which suit. The players just need to memorize them.

Each of these tiles also has a name corresponding to some Chinese cultural or philosophical symbol. The dice are ranked based on these names, not based on their number. Again, there is no specific formula to remember each tile’s name and rank. However, there are some helpful visual cues.

Their names are ranked as follows:

1-1: Earth. Tip: Earth is below heaven, so it’s the second highest tile. Earth is a planet, and the two opposite pips look like orbiting planets.

4-4: Man. Tip: Man lives on the earth, so he ranks below earth. Man is flesh and blood, so naturally the tile has all red pips.

1-3: Goose. Tip: Animals are lower than men, so this ranks below man. Think of the red pip as a head on the end of a long, white neck.

5-5: Plum Flowers. Tip: Plants rank below animals. Think of each set of five pips as four petals around a white center.

3-3: Long Threes. Tip:  This could be mistaken for “Tree,” but it has fewer pips than the Plum Flower. The tile has two lines of three pips vying for space on it.

2-2: Bench. Tip: Furniture is made from plants. If the tile is a bench, the two sets of pips on either end are screws for the legs.

5-6: Axe Head. Tip: The axe is kept under the bench. The set of five is a handle, and the set of six is a hatchet head.

4-6: Red Head Ten. Tip: The total pip value is ten. The set of six forms a pair of legs, and the set of four is a mane of red hair.

1-6: Long Leg Seven. Tip: The total pip value is seven. The red pip is a head, and the white pips are a pair of legs.

1-5: Big Head Six. Tip: The total pip value is six. The set of five are the arms, legs, and torso, and the red pip is the head.

The military suit in Chinese Dominoes is made up of the remaining ten tiles in the set, ranked and named according to the combined number of pips on either end of the tile. These tiles are also split up into pairs based on this number. For example, the 4-5 tile and the 3-6 tile are both called “nines,” and count as a pair. Together, they rank above the 3-5 and 2-6 tiles, which are “eights.”

The exception is the three and the six, which are counted individually. In certain games, they may be paired together to create a third suit—the “supreme” suit—which outranks all other pairs.

All Chinese domino games are dealt from a “woodpile,” which is a row of stacked dominoes. The height of the woodpile varies depending on the game.

The dealer is determined by rolling one or more dice. The specific game determines how many dice are rolled. The order of play proceeds counter-clockwise from the dealer.

Games played with Chinese Dominoes are usually gambling games, though any type of stakes may be used. Spectators may also place bets.

Pai Gow and Tien Gow are the most common games, and are played with one set of dominoes for two to four players. Tien Gow is played differently depending on whether there are two or four players.

Bull Fighting is another gambling game, and is played with three to six players.

Kol-Ye-Si is played in many US casinos, and can have up to ten players.

Two or more players can play Collecting Tens, which uses multiple sets of dominoes depending on the number of players.

The simple game known as “Fishing,” or Tiu U in Chinese, is played with more than one set of dominoes.

Another Korean game is Dancing Dragons. This game treats the dominoes like Western Dominoes, matching up the tile ends rather than treating all a tile’s pips as a single unit.

There are also a couple solitaire games you can play with Chinese Dominoes. The Cosmic Turtle and Opening the Pagoda, are both solitaire games requiring a specific layout, like mahjong.

You can play Pai Gow online at kongregate.com, game-game.com, and dailyfreegames.com.