There are many domino games currently available but playing any given one of them is mostly determined by 2 things. The first being how many players are involved. The other is which set size(s) you currently have on hand. The set size refers to the highest double number you have on the tiles. This ranges from 6 x 6 up to 18 x 18 pips (points/dots) on a single tile. The actual sets are: Double 6, 9, 12, 15, and 18. But for this article, we’ll mostly focus on the Double 6, 15, and 18 sets and their games. Domino sets do come in a variety of colors and some even have the numbers printed on the tiles. So domino set options are not limited to just black and white with dots!! But the main recommendation is to get a set that you at least like looking at. Then attempt to go for clarity.

The standard and most commonly used set is a Double 6 set. This set consists of 28 tiles in total. The 6 pips tile is matched with itself on 1 tile and then matched with the numbers 5 down to blank on the next tiles 1 by 1. Then the set continues starting at 5 pips and so on down to a single double blank tile. With Double 15 and Double 18 sets, it’s the same idea but with more numbers/tiles involved. But bigger set sizes allow for more players to join a particular game and/or allow for more variations in the games. You’ll have 136 tiles in a Double 15 set. You’ll have 190 tiles in a Double 18 set. 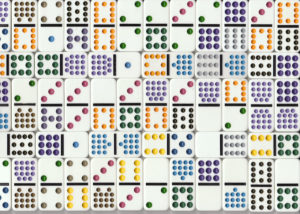 Keep in mind, domino games will have so many variations that it’s ridiculous!! Much of that is determined by who you’re playing with and/or where. For example, an official event type of situation would make sure everyone’s playing by standard/official rules. But while playing with friends/family, the rules can go all over the place!!

On with the games!!

Below is a list of games that can be played with Double 6, 15, and 18 sets. These come in no particular order.

A scoring type game where the players score based on the pips on the ends of all the tiles on the playing field. These must total a multiplier of 5. For example, when you have end tiles of 6 and 4 and you place a 5 somewhere in the mix. There’s 15 points scored for you.

Mexican Train is a block type dominoes game using a Double 12 as the standard set. But the required set is determined by how many players are in the game. The initial setup is also determined by the numbers of players. For example, with only 2 players, each player gets 10-12 (depending on the variations) tiles. This uses a Double 9 set. But with 16 players, each player gets 9 tiles and this uses a Double 18 set.

This is the most common of dominoes games. This one goes by many names and is played by 2 to 4 players. Any variations to the actual rules of this game should be agreed upon before play starts.

This is a block type game. David Galt invented this game for Cardinal Industries so they could produce their own set of Double 15 dominoes. Anywhere from 2 players and up can play this game.

This is a solitaire type game and is also known as “12s”. The object of the game is to remove all the tiles. The play is similar to the card game Pyramid Solitaire. You match 2 tiles to be equal to 12 instead of 13 as in Pyramid Solitaire.

To mix things up a bit more, this is a memory type game. It’s played very similar to the card game of the same name. It also goes by other names including Memory, Match Memory, and Pairs. A Double 6 set is the standard for this game but bigger sets accommodate more players and/or longer play.

It’s the same game as Fives-Up but using multiples of 3.

Chickenfoot is a block type game which started in Texas and is still quite popular. It’s named accordingly because the tile layout can resemble a chicken’s foot. This game requires players to say “chicken foot” accordingly and “uno” as a courtesy when they only have 1 tile. The number of players and how many tiles they all start with are determined by the size of the set used.

Clearly, this is a block type game that’s similar to Draw Dominoes!! The main differences are that the remaining tiles, after the draw is completed, are no longer used. That, and play is passed to the next player rather than drawing from the “boneyard”. This is typically played by 2 to 4 players.

This is a solitaire type game. The rules change a little bit depending on the set size you’re using. The idea is to leave 1 or no tiles remaining in play to win. The tiles are removed from play due to being “good neighbors. It means tiles with matching pips on either side.

A game deemed as good for kids. It’s a block type game which is played by 2 or more players. Once play begins with the highest double, it only continues in 1 direction off the first tile. It’s not like other domino games where play can branch off into many directions. This is where it gets its name from!! You can turn the “arm” in another direction to keep play on the table. But it’s always played from the “arm” the second player started.

Another block type game but this one is meant as a gambling game. This is meant for 2 players up to however many players the set can handle. The set can handle the player count as long as there’re at least 8 tiles left in the “boneyard”. Some variations include:

The truth is that the actual list of domino games is pretty big. This was just the partial list. Trying to include them all here would make this article novel length!! But a much more complete list of domino games is found on the Domino Play site. And for those of you on the go, there are Android and iOS versions available as well.