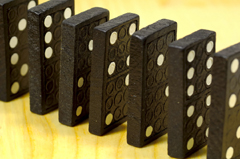 Domino toppling can be performed with just about any type of dominoes, including standard sets. However experts such as Weijers Domino Productions, the current team record holders, use special dominoes made of recyclable polystyrene.

For large-scale projects, the uniformity of the dominoes is important. What’s more, different types and sizes of dominoes will topple at different speeds.

Many toppling projects also use different non-domino elements such as ramps and marbles. These elements spice up the project with added complexity.

Draw out your toppling plan beforehand. You can also sketch lines on the floor or tabletop to aid in the setup. This is especially helpful for keeping lines straight and curves uniform.

Though you can place dominoes by hand, you may sometimes find it useful to use tweezers.

When building a large project, use safeties. Safeties are breaks or barriers that you put in place between sections to protect most of your work if the dominoes fall prematurely.

The “Fan Area” at Weijers Domino Productions website has good information for anyone interested in being a domino builder and toppler.

At least one book about domino toppling is available at Amazon. It’s called Championship Domino Toppling by Robert Speca.