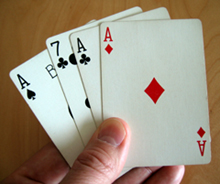 Hola (pronounced HO-lah) is a card game for two or four people. The game seems to have originated in the Ukraine. Hola is popular in central Canadian cities like Winnipeg and Regina where there are many people of Ukrainian origin.

Hola is a card game for 2 or 4 people. It’s most fun when played by 4 people as a partner game.

The goal is to score more points than your opponent. If you take all of the points, you score “Hola”. There is no additional point value for scoring “Hola”. It is strictly a matter of pride for the winner and humiliation for the loser.

Deal 4 cards to each player. Leave the remaining cards in the center of the table as a stockpile.

The player to the left of the dealer lays down the first card. Play proceeds clockwise.

2s and 7s are wild cards. 10s and Aces are the only cards that have a scoring value. They are worth 10 points each. All other cards, including the wild cards, are worth 0 points.

After the leading player lays down a card, the next player has several options:

2) play a wild card to take control of the trick

3) play any other card and give up the trick

When the play comes around to the dealer, the dealer may either:

1) take the trick, if he still has control of it and it is his to take

Here’s are a few examples of how play could go in a 2 player game:

Player 1 plays a 9. Player 2 plays an 8. Player 1 takes the trick. Each player then draws one card from the stockpile to replenish their hands and the winning player will start a new round.

Player 1 plays a 5. Player 2 plays a 5 to take control. Player 1 cannot or decides not to fight and Player 2 takes the trick. Each player draws one card from the stockpile. Now Player 2 leads.

Play continues until are cards have been played and the stockpile is exhausted.

There is a possible 80 points available in each deck played since there are 4 10s and 4 Aces, each worth 10 points. All other cards are worth 0 points, including the wild cards.

Players usually play until they reach some predetermined score, such as 500 points. Use a pen and paper to keep score.

The lead player generally should not lead with point cards (10s or Aces) unless prepared to fight 3 or 4 rounds to ultimately take the points. The non-lead player has the advantage of playing last card. For example, the lead player would want to play a 10 if he also had another 10 and two 7s (wild cards) to back it up.