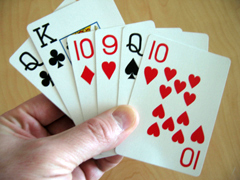 Santase (pronounced SAN-tah-say) is a two-person card game that’s popular in Bulgaria. The Santase rules are a little tricky but, once learned, the game is highly addictive. The card game rules are similar to those used in 66, and an Austrian game called Schnapsen.

Santase is a card game for 2 people.

The goal is to be the first player to score 66 points. Or, if neither player scores 66 points, the player to take the final card wins.

Deal 6 cards to each player. Flip over one card. That is the trump suit.

Decide who goes first. After the first deal, the loser of the previous hand deals and the winner lays down the first card.

Each player then draws one card from the remaining cards in the deck. Winner draws first.

If you have the king and queen of the same suit, you may show it and score 20 points. King and queen of the trump suit scores 40. You may only do this if you are leading the turn (laying down first). Do it at the start of your turn. Leave the queen down and take back the king.

If you have the 9 of the trump suit in your hand you may exchange it for the displayed trump card. But only if you are leading the turn, and only at the start of your turn.

Once no more cards are available in the deck, play proceeds a little differently. The player who won the last hand lays down first. If the other player has a card of the same suit they must play it. If they do not, they must play a card from the trump suit if they have one. As before, play continues until one player scores 66 points or more, or all cards have been taken.

At any point in the game, provided there are at least 3 cards remaining in the deck plus the displayed trump card, a player may close the deck. To do this, turn over the displayed trump card. You must do this at the start of your turn and you must be leading (laying down first). Then the game proceeds as in the “run-off”. There is danger in this play. If the player who closed does not score 66 points, the other player scores 3 points for the win.

Games are played to any point value the players agree on. Typically, the first person to reach 11 points wins.