Liar’s Dice goes by many names. But for the most part, each named version is played essentially the same. The game itself gained some popularity being played aboard the Flying Dutchman. But the truth is that the game has been around a lot longer than the Pirates of the Caribbean movies!! The main changes come in the form of variations and other rules agreed upon before playing. So, much of the variations will depend on where you’re playing and who you’re playing with. The main two setups for Liar’s Dice are Common Hand and Individual Hand. With common hand, each player has their own set of dice. With individual hand, all players are using a single cup of dice. 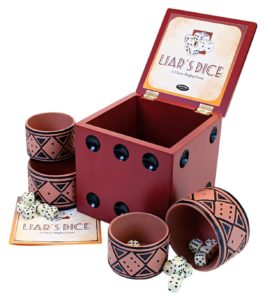 In common hand Liar’s Dice, each player has 5 dice and a cup to roll them in. All together the players bounce their dice in their cups and quickly place their cup open side down on the table for each round. Each player proceeds to look at their own hand of dice and make a choice while using their cup to hide their hand from the other players. For the first player, he/she must choose what they’ll call to start the game based on what they see of their own hand. Once the bid is made by the first player, the next player clockwise in turn has only two choices. Either attempt to challenge the previous player’s bid or make a bid.

For the next player in line to make a bid, it has to be a higher bid compared to the previous player. For example, player 1 makes a bid of four 2’s in his hand. The part about him/her lying or not doesn’t matter if you’re going to bid. What does matter is when you make your bid, you have to go higher. So, either making a bid of one or more 3’s OR five 2’s is the minimum. Do note you only have 5 dice each to start with. So of course, a person bidding six 2’s is clearly lying and would be easily challenged!!

When you decide to challenge a bid is when you’re concerned if the bidder is lying or not. So, if a player bids three 2’s for example, your challenge has to prove their bid wrong. If the current player decides to challenge, all players will reveal their hand. It wasn’t just the player being challenged. So, the first player bids three 2’s and you challenge. If the bidder has what he/she bid, regardless of their other dice, they win. If not, the challenger wins. Whoever loses a challenge also loses 1 of their dice. Whoever loses the challenge starts the next round of play. The winner is the person that didn’t run out of dice. 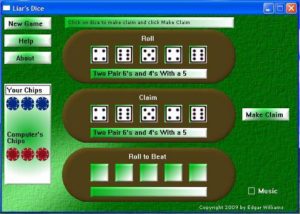 With Individual Hand, there’re only 2 players. Whoever is decided to be the first bidder will bid using poker hand names. Sometimes the standard dice are switched with poker dice. Poker dice are just like standard dice but have pictures of the cards on them instead of pips (dots). Both players roll at the same time. Whichever player is first makes their bid as always. But instead of being challenged for dice, the bet is in place instead. There’s the other difference between the games. Common Hand can also include bets and not just play for dice gains alone to win.

Similar to poker (exchange card(s)), the second player can reroll 1 or all of their dice. The first player calls their hand according to poker hands. The second player can either call player 1’s bluff or call their higher hand and see if the first player wants to “call shenanigans”!! Once a hand is challenged, the person who wins the challenge wins the bet. The person that was challenged is the one to reveal their hand and not the challenger.

The hands that can be called are more similar to Yahtzee hands. You have five of a kind down to three of a kind. The small and large straights and others are also included. But the hands are seen as and are called more like poker hands. So if you rolled 1 to 5 (you only have 5 dice), there’s a small straight. If you rolled four 1’s, there’s a four of a kind and so on.

There’re a number of variations for Liar’s Dice. For the most part, the variations are meant more for common hand. But the main rule is always in place. That is, always agree to the rules before play begins. Here are some of the more common variations.

Again, these are some of the more common variation. And again, make sure the rules are agreed upon before play starts!!