The rules to Rummy 500 are heavily decorated with variations. There’re more variations to this game than the actual number of Rummy games!! Anyone would find it as nothing short of overwhelming trying to keep track of it all. That’s why most won’t play it outside their own “circles”. But don’t let that stop you. Instead, here are the basics and some variations will be provided later.

In a standard game, you need 2 up to 4 players and a standard deck of 52 cards. Whoever the dealer is will shuffle and deal 13 cards, face down, to each player in a 2 player game. If there are 3 or 4 players, 7 cards are dealt to each player. From there, the rest of the deck is placed face down on the table. 1 card from the top of the deck is placed face up on the table next to the deck. This will start the put down line (A.K.A. the discard pile). The put down line is spread out just enough so that all players can see each card in it. House rules will determine if the dealer or the player to the left of the dealer will start. Each player will pick up their pile and sort their cards as they see fit.

Each player must pick up a card and put down a card during their turn. Scoring is optional during your turn but often desired!! Whoever the current player is must decide if they want to pick up 1 card from the remaining deck or pick up from the put down line. Once the current player picks up, regardless from where, he/she must decide how they wish to score (if at all during that turn) and then put down 1 card from their hand, face up on the put down line, to end their turn. To end the round, you have to run out of cards. You do this either by scoring with all your remaining cards or by putting down your last card. To win the game, you have to be the first to score 500 or more points. This will usually take several rounds to do.

Do note that if you end a round, it doesn’t always mean you win the round. Even though you made your opponent(s) deduct points, you could still be at a lower score compared to them!! As ridiculous as that may seem, it does happen!!

In the standard game, each card from 2 to 10 is worth its face value points. Aces are worth 15 points each. The face cards are worth 10 points each. You score points during your turn by placing 3 or more cards on the table in front of you. Said cards must either be “of a kind” or a straight flush. So, if you place three or four kings on the table in front of you, that’s 30 or 40 points for you in total. The same goes for lower scoring cards. It’s a 3 of a kind or 4 of a kind depending on how many you used. If you place the 8, 9, and 10 of hearts on the table, that’s a straight flush in Rummy 500 worth 27 points in total.

Because of the variation given later, the aces can get a little tricky here and there. Again, these are the standard rules. So as such, the aces are always 15 points each no matter where they’re used. In the standard Rummy 500 game, you can’t “roll over” with a straight flush. This means either the ace or the king will be the ending point for all straight flushes. 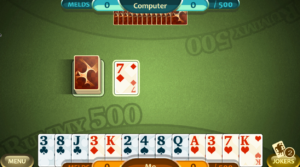 Rummy 500 for Android played on the Remix OS.

You can also score depending on the cards your opponent used to score with. In the case of a 3 of a kind score made by your opponent, you can place the fourth card in the set on their pile. When you do, the points for the fourth card go to you rather than your opponent. In the case of a straight flush, no matter how many cards they used for it, you can place cards on either open end. Again, the king and ace are the end points. So you can’t place cards on those. So if your opponent placed 5, 6, and 7 of spades on the table, that’s 18 points for them. You can place an 8 of spades on the 7 side AND an ace, 2, 3, and 4 of spades on the 5 side. There’s 17 points to you. There’s no limit other than the end point cards. Just make sure you can track it!! 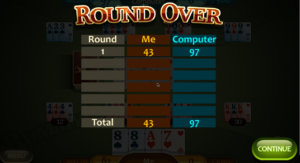 That’s just 1 round. Still a long ways off!!

Most of the variations show up in the scoring but there are others. Here are some variations you can try out even if you’re playing for the first time.

You won’t find this variation in several of the Rummy 500 games available for different platforms. Also note that some people use this and some don’t bother. Simply take your pick!!

An end of the round can be prevented if a valid Rummy can be called from the last card. If that happens the “offending” player must take a card from the remaining deck and play continues. For example, player 1 has three aces on the table. Player 2’s last card is an ace and tries to discard it (not paying attention) to end the round. Instead of the round ending, player 1 gets a free ace and player 2 draws another card. It’s now player 1’s turn.

When scoring off your opponent’s cards on the table, instead of laying the card(s) on their pile, you place them near yourself. This is often used with the Rummy Slap variation. The idea is to try to freely score as mentioned above because the opponent(s) were not fully paying attention to everything. That and the fact that the cards are all scattered certainly didn’t help the “offending” player!!