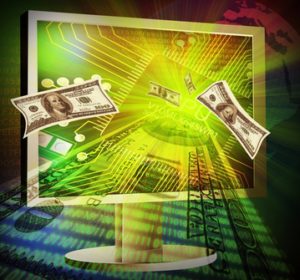 Imagine asking to borrow a few dollars from a friend and, instead of reaching for a wallet, he reaches for a phone. He’s not confused, he’s just transferring a few dollars into your bank account. Virtually all large banks and most smaller financial institutions offer mobile banking, but where is this currency trend heading?

Were Debit Cards the Forerunner for Virtual Cash?

According to Quezi.com, The U.S. Census Bureau expected almost 484 million debit cards to be in use by 2010, as debit card use has eliminated check writing for many U.S. consumers. Mobile banking is fast gaining popularity too, with online payments, debit cards and mobile banking—some experts are beginning to wonder if we really need cash in our technology-based world.

Virtual currency is used predominantly on Internet social gaming sites, or as a way for charitable organizations to raise funds from donors. According to Matt Parker’s July 11, 2012 article on AAAComment, the biggest negative for virtual currency today is that many people don’t know it exists. Parker’s article introduces Bitcoin, Ven and Virtual weaponry as three of the currencies used online for purchasing products and supporting causes. The number of restaurants and merchants that accept virtual currencies online and offline is slowly increasing as well.

Can We Really Afford to Keep Minting Coins?

Technology reporter David Aaron recently reported on some changes virtual cash could bring. His article reminds people that large sums of cash change hands during criminal activities— reducing cash might reduce crime. He hints at the financial burden governments face to print or mint money for the citizenry. The cost of printing a penny in FY 2011 was 2.41 cents and a nickel cost 11.18 cents, according to CoinUpdate.com. The two smallest denominations of coins claimed 73 percent of the profit for US coin currency minting activities between 2006 and 2011.

There are some concerns surrounding private management instead of government backing, regulation enforcement and finding mechanisms to allow exchanges between the various currency styles. However, virtual currency seems to be working very well for social gaming sites, such as bingo from JackpotJoy.com, which allow players 18 years or older to earn cash-redeemable points

How Will We Pay and Play Tomorrow?

65 percent believe that virtual currency will replace tangible cash by 2020, suggests an online poll by Pew. These experts are aware of the pros and cons, but are confident the drawbacks can be overcome more easily than the security issues of the current financial crisis.

On TalkingPayments.com, it is theorized that with virtual currency:

Contemplating the disappearance of paper money and jingling change in our pockets is somewhat disconcerting for some people. Embracing the Internet was difficult for many people when the mysterious portal first appeared. However, in the future we might be paying our mortgage, gambling and pre-paying for a doctor’s visit from our phone. Millions of people are already paid through direct deposit—is virtual currency so hard to imagine?