For those familiar with playing Bridge, this game is very similar. You have to either win or lose what’s called a “trick”. But the main difference with the King card game is that you’re playing individually. While playing Bridge, you’re playing in pairs of 2 to make up the typical 4 players of the game. To win at King, you simply need to be the person with the highest score. Please don’t confuse this game with similarly named drinking games.

In the King card game you have to note the difference between a hand and a trick. A trick is a single round of play which is 1 card played by each player. A hand is 13 tricks with a certain set of rules. The cards are ranked from ace (highest card) down to the 2 (lowest card). The scoring is spread across 6 negative hands and 4 positive hands. All players must play at least 1 card for each trick. 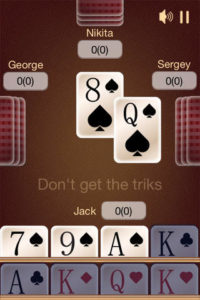 This is the King card game for iOS.

All cards in the standard 52 card deck are dealt 13 to each player. Whoever has the king of hearts is the “dealer”. The variation is that the player with the king of hearts can decide who the dealer will be (including themselves). The dealer is the person who starts the game and decides several other rules for positive hands. Play always continues to the left of the dealer. Whoever wins the trick is the person who starts the next trick. So that player will start with any card they have. The scores are totaled at the end of each hand.

To start, the dealer will place any 1 of his/her cards on the table. Note the ranks given above. To win the trick, you have to play the highest ranking card in the trick. The other method to win a trick is to play the highest trump card if available. The player who begins the trick determines the suit to be played with the card they use. All other players must either follow suit or use a trump card if available. If they can’t follow suit, they can play any suit but can’t win the trick. Any cheating results in penalties depending on the house rules. Loss of positive points is the usual result.

Each of the 6 hands has its own rules in this order.

So anyone familiar with the Hearts card game (installed with Windows), would know to avoid winning tricks as much as possible. 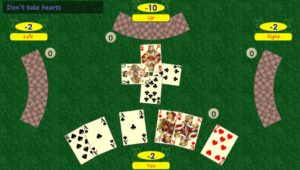 The King card game for Android.

Each player takes their turn being the dealer. It’s not based on who won the trick. It’s started on whoever is the highest scoring player from the negative hands. So -10 would be a higher position compared to -50. Then the dealer’s turn simply shifts to each player, 1 by 1, going left after each trick. The dealer has some choices to make.

This is the basics of the auction. The idea is not to overwhelm with the large list of details that are really involved.

The first choice of the dealer is if he/she wants to auction off their trump suit naming benefit to another player. The auction bids are tricks won from the bidding player(s) AFTER the hand is completed. For example, the dealer decides to hear bids. The player 2 spots to the left of the dealer bids 5 tricks. The points from those tricks are given to the current dealer after the hand is totaled. They’d be subtracted from the tricks of the hand and given to the dealer. If the bidder can’t cover the bet with the points they gained for that hand, the points are subtracted further from the bidder. This would result in the bidder very possibly ending with a negative score.

Note: The auction is only for the right to choose the trump suit. The dealer still has 2 more choices to make.

Playing Up or Down 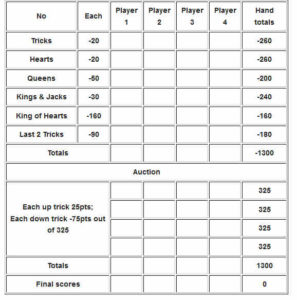 The scoring table for the King card game.

The score is determined by the tricks won during each hand. It’s not based on any value of the individual cards. The points are spread across the players via a maximum amount. It ranges from -1,300 points to 1,300 points in total. The columns labeled “player 1” to “player 4” are totaled downward for a final score. The points are distributed across the rows for each hand. The Hand Totals column shows the available points for each hand. The “Each” column shows how many points are won or lost during that hand for each trick.

Take the first row for example. That’s for the negative hands. It’s the first hand so according to the given rules above, you lose 20 points for each trick you gain during that hand. There’re 13 tricks available in each hand. So 13 x 20 = NEGATIVE 260 points in total. So once that hand is complete, you simply tell the scorekeeper how many tricks you’ve won. So if the results were 3, 2, 5, and 3, the scores so far would be -60, -40, -100, and -60. When combined, you have the negative 260 points for the hand in total distributed among all players.

In the bottom half of the scorecard, the dealer chooses if the hand is played up or down. So after all 13 tricks are played, your score either gains, stands still, or reduces. Yes, that 75 point loss per round while playing down can bury your current score quite fast!!