Pyramid solitaire is a fun and popular solitaire game that begins with the cards dealt in the shape of a pyramid or triangle.

It’s not always possible to complete this Solitaire game. How often you complete the game depends largely on the random deal of the cards, as well as the strategy you use in removing cards.

Shuffle the cards then deal out 21 cards in the shape of a pyramid with six rows, as shown in the photo. Place the remaining 31 cards in a pile face-down, beside the pyramid. These cards are called the stock. 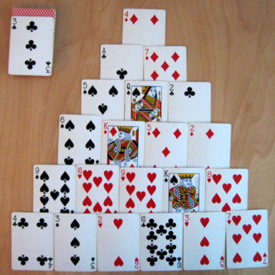 This diagram shows the starting layout for Pyramid Solitaire.

Object of the game

The object of the game is to remove all the cards from the pyramid, the stock pile and the waste pile, and place all 52 cards in the discard pile.

This means you may remove the following cards from the pyramid or from the piles:

Any of the following pairs of cards that add up to 13:

When you remove cards, put them in a separate discard pile. Once in the discard pile, these cards are no longer in play.

Suit and color are not important in pyramid solitaire.

Using the stock and waste

Turn over the top card from the stock pile at the start of the game.

If you can’t play the top card of the stock pile, and you have run out of moves, move it to the waste pile, face-up. The top, exposed card in the waste pile is available for play.

You win the game if you successfully remove all cards from the pyramid, the stock pile and the waste pile into the discard pile.

To play this variation, begin the game with a seven-row pyramid containing 28 cards, instead of a six-row pyramid. The remaining 24 cards go to the stock pile.

In addition to the pyramid, you may wish to deal an additional row of exposed cards separate from the pyramid. This is called a reserve row. These cards are exposed and immediately available for play to start the game.

For further clarification of these rules in action, watch the video below.